Live Music Returns to The Pastime Theatre in July! 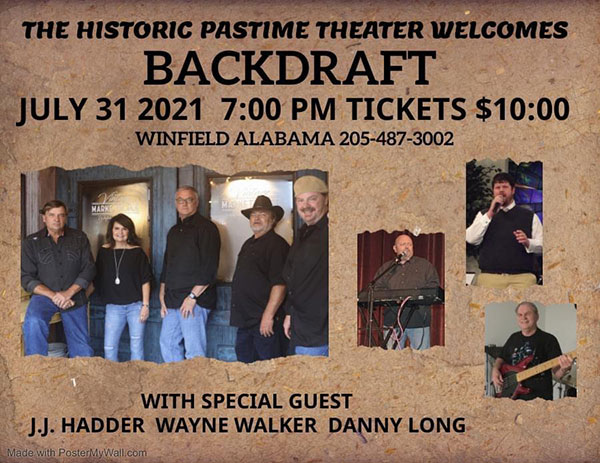 July 31st at 7pm, the Pastime Theatre will begin its come back with local talent favorites and Walker County-based country rock band Backdraft. Original band members were all firemen or the wife of a fireman, hence the name Backdraft. Backdraft has now spanned over 2 decades and continues to offer a variety of music styles from Oldies to Country to Rock & Pop. Backdraft has performed all over Alabama and neighboring states. Recently two of Backdraft’s members, Vickie Cosby and Jeff Parnell, were featured in 78 Magazine.   Vickie Cosby, the lead singer for Backdraft, grew up with a love for music and singing in church. Singing has always been a passion for her and she was instrumental in forming the band Backdraft.

Tony Long is one of the original members of Backdraft. Tony played a short while in the 80’s with the group Shenandoah.

Terry Merchant, also a longtime member of Backdraft, is the drummer and band manager and has had a long career in entertainment. He also plays drums for his gospel group.

Jeff Parnell has entertained audiences all over the southeast. Now a member of Backdraft, he plays both bass and acoustic guitar and also adds his vocal talent.

Unfortunately, band member Barry Key will be unable to perform due to illness, but the following friends of Backdraft will be performing:

Danny Long, an amazing bass guitarist, started playing as a teenager and has played in many bands throughout his musical career.

J J Hadder is an awesome vocalist that grew up with a love for music and has been entertaining all his life. He sang with the well-known gospel group Gold City and today continues to entertain crowds with his heartfelt harmony and vocals.

Wayne Walker is a well-known keyboard talent and soulful harmony singer. He has played music all over the southeast with various bands. Backdraft welcomes his unique style of music along with other friends of Backdraft to offer the audience a memorable night!

This concert is not part of the original concert series that has now been rescheduled. Tickets for this performance are $10. Tickets are available, cash or check only, at the Pastime Theatre office, Winfield City Hall, Gold Connection and The Kemp Foundation. For more information call 205-487-3002.